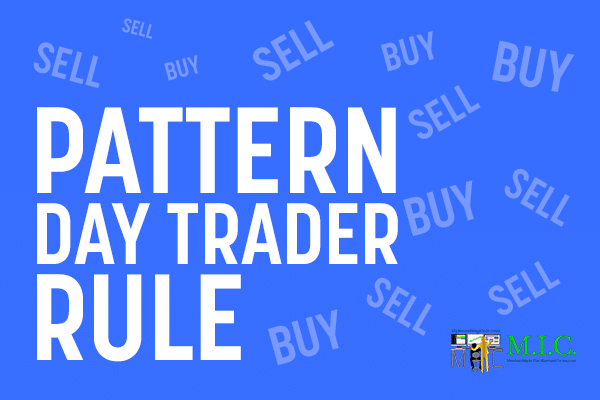 Pattern Day Trader Rule (PDT) – Get Around It

For those of you who don’t know, the Pattern Day Trader Rule (PDT) is a regulation set by the SEC that stipulates that investors who make more than four day trades in a rolling five-day period are considered “pattern day traders” and are subject to special margin requirements.

So, what does this mean for you? Well, if you’re planning on becoming a day trader, it’s important to understand the PDT and how it might affect your trading strategy. In this post, we’ll take a look at what the PDT is, how it works, and some tips on how to avoid triggering it.

As if the stock market wasn’t confusing enough, investors must navigate another conundrum of acronyms to trade legally. The Pattern Day Trader (PDT) rule is designed to “protect investors from the consequences of their own risky decisions.” Don’t get me started on why I put quotations around that.

Essentially, the PDT rule states that an individual cannot make more than three day-trades during a rolling five-day period without having a margin account with at least $25,000 in it. Now, try saying all that five times fast! While this might seem like a deterrent for day traders, there are clever ways around it. We’ll talk about those later.

What is the PDT Meaning?

Well, in short PDT an acronym for “Pattern Day Trading”. It occurs when an investor uses a margin account to buy and sell stock within the same trading day multiple times. Market regulations state that if an individual engages in this practice more than three times within a rolling five-day period in a margin account, they must maintain a minimum of $25,000 cash balance at all times. So next time someone asks you about the PDT meaning, you can explain it in all its glory!

The History of the Pattern Day Trader (PDT) Rule

The Pattern Day Trader (PDT) Rule was created by the Financial Industry Regulatory Authority (FINRA). The Pattern Day Trader Rule’s history is long and winding. Compiled through various regulatory guidelines, this rule has been in place since the early 2000s. To be specific, I believe it was 2001. You remember 2001, right? The tech bubble had popped like a teenage zit and Shaggy was topping the charts with his hit single “It Wasn’t Me”, which just so happens to be FINRA’s excuse for the PDT rule. “We created it to protect investors,” they said. Mhmmm. So, there’s that. Those were the days…until PDT was created and, of course, 9/11 #NeverForget.

It seems that old habits die hard as this particular regulation has survived every market shift, both up and down, ever since – a monument to the fact that investors need to be wary with their investments and should always look before they leap. To this day, PDT stands tall and isn’t leaving anytime soon.

Examples of What Triggers the Pattern Day Trader Rule

So what qualifies me as a Pattern Day Trader? Usually, trading four or more times in five business days while your equity is below $25,000 in your margin trading account means you would fit the pattern day trader category.

Yeah, I know, it’s confusing. Let’s say you have a $5,000 account and you have margin enabled. You start trading and it goes a little like this:

In the example above, Trade #1 starts the counter on whatever day of the week that trade happened. It could be Mon, Tues, Wed, Thur, Fri. So, let’s say that this trade happened on Thursday. That’s Day 1. So, the counter starts going like this:

If you’re about to trade on Day 4 or 5, think twice before you fill up your order book. You’ll trigger PDT, and then your account will be locked for 90 business days. You will have to switch brokers or wait it out.

The rolling five-day period clears out completely once their are no trades that have occurred within five business days of the last trade.

Confused yet? Yeah, I know the feeling. Traders hate PDT for a reason—it’s tough as hell to get a grasp on all of the little nuances that could trigger it.

Now that you’re completely terrified of triggering PDT, let me put you at ease. There are several ways to steer clear of the pattern day trader rule and confidently embark on your trading journey.

Open an account with a day trading firm which has already accumulated a minimum of $25,000 in equity—this grants you a certain exception from the PDT requirements. This is also the most obvious. You’re probably reading this thinking, “Duh! We know that.” You’re reading this post because you don’t have that capital available. I know. So, on to option two.

Sign up for an account with two separate brokers – essentially doubling your chance at success. This is the approach I took when I started trading. I had a little more than $6000. I split it between three different brokers, each with at least $2,000, so that I could have a margin account.

Use a cash account. This is the most simple option and the most responsible. A cash account is not subject to the Pattern Day Trader Rule since every position requires you have enough capital to place the trade. You will be subject to settlement dates. These are not difficult. It takes two business days for your stock trades to settle and only one business day for options trades. This is referred to as T+1 and T+2. ‘T’ stands for ‘Trading Day’. So, it means ‘Trading Day + 1 Business Day’. After that time passes, your cash from that trade will available to trade.

Avoid going “all-in” because that’s risky, and you need extra funds to be able to place other trades while others are being settled. So, in this case, you’re managing your capital and making traders like the responsible human we know you are. Simple.

So there you have it, the PDT rule in a nutshell. Although its a pain, there are ways around it. By being aware of what triggers the rule and following some simple guidelines, you can avoid having your trading account classified as a pattern day trader.

Have any questions about the PDT rule? Leave them in the comments below, and we’ll answer them!

If you’re interested in learning more about day trading, take our free day trading course. See you there!

Joseph Kelly is the creator of the Day Trading Accelerator course. He is a day trader who has been trading penny stocks and options since 2015 and specializes in day trading options on large-cap stocks. He leads the Large Cap & Options room of the My Investing Club chat room, where he holds weekly educational webinars for members. Joseph is renowned for his ability to simplify complicated topics and has created more than 200 hours of educational content for My Investing Club. In his spare time, he loves to cook and play guitar.

We use cookies on our website to give you the most relevant experience by remembering your preferences and repeat visits. By clicking “Accept”, you consent to the use of ALL the cookies.
Cookie settingsACCEPT
Manage consent

This website uses cookies to improve your experience while you navigate through the website. Out of these, the cookies that are categorized as necessary are stored on your browser as they are essential for the working of basic functionalities of the website. We also use third-party cookies that help us analyze and understand how you use this website. These cookies will be stored in your browser only with your consent. You also have the option to opt-out of these cookies. But opting out of some of these cookies may affect your browsing experience.
Necessary Always Enabled
Necessary cookies are absolutely essential for the website to function properly. These cookies ensure basic functionalities and security features of the website, anonymously.
Functional
Functional cookies help to perform certain functionalities like sharing the content of the website on social media platforms, collect feedbacks, and other third-party features.
Performance
Performance cookies are used to understand and analyze the key performance indexes of the website which helps in delivering a better user experience for the visitors.
Analytics
Analytical cookies are used to understand how visitors interact with the website. These cookies help provide information on metrics the number of visitors, bounce rate, traffic source, etc.
Advertisement
Advertisement cookies are used to provide visitors with relevant ads and marketing campaigns. These cookies track visitors across websites and collect information to provide customized ads.
Others
Other uncategorized cookies are those that are being analyzed and have not been classified into a category as yet.
SAVE & ACCEPT